It’s an exciting day here at Bobby Berk HQ (and not just because Memorial Day weekend is almost here). It’s because we finally get to share one very special and BRAND NEW design project that we’re sure you’re going to love as much as we do. It’s time to dive into all the details behind Bobby’s most unique and ambitious project yet: the Spanish-style desert escape, Casa Tierra, which he is now hosting on Airbnb.

After months of planning, construction, renovation delays, and some very hot site visits, it’s finally time to let you in on what Bobby and our design team have been up to. And this isn’t your average design project either. Located in Palm Desert, California, Casa Tierra is a 2.3-acre property consisting of multiple buildings, tons of outdoor spaces, and gorgeous views. It also happens to be Bobby’s first vacation home design – and it’s now available to book for your next getaway! So to celebrate the launch of Casa Tierra on Airbnb, we’ve got a behind-the-scenes look at how the project really came together – including some amazing before and after photos you have to see to believe!

Be sure to come back later this week to see (and shop) all the rooms and products used to bring Casa Tierra to life! 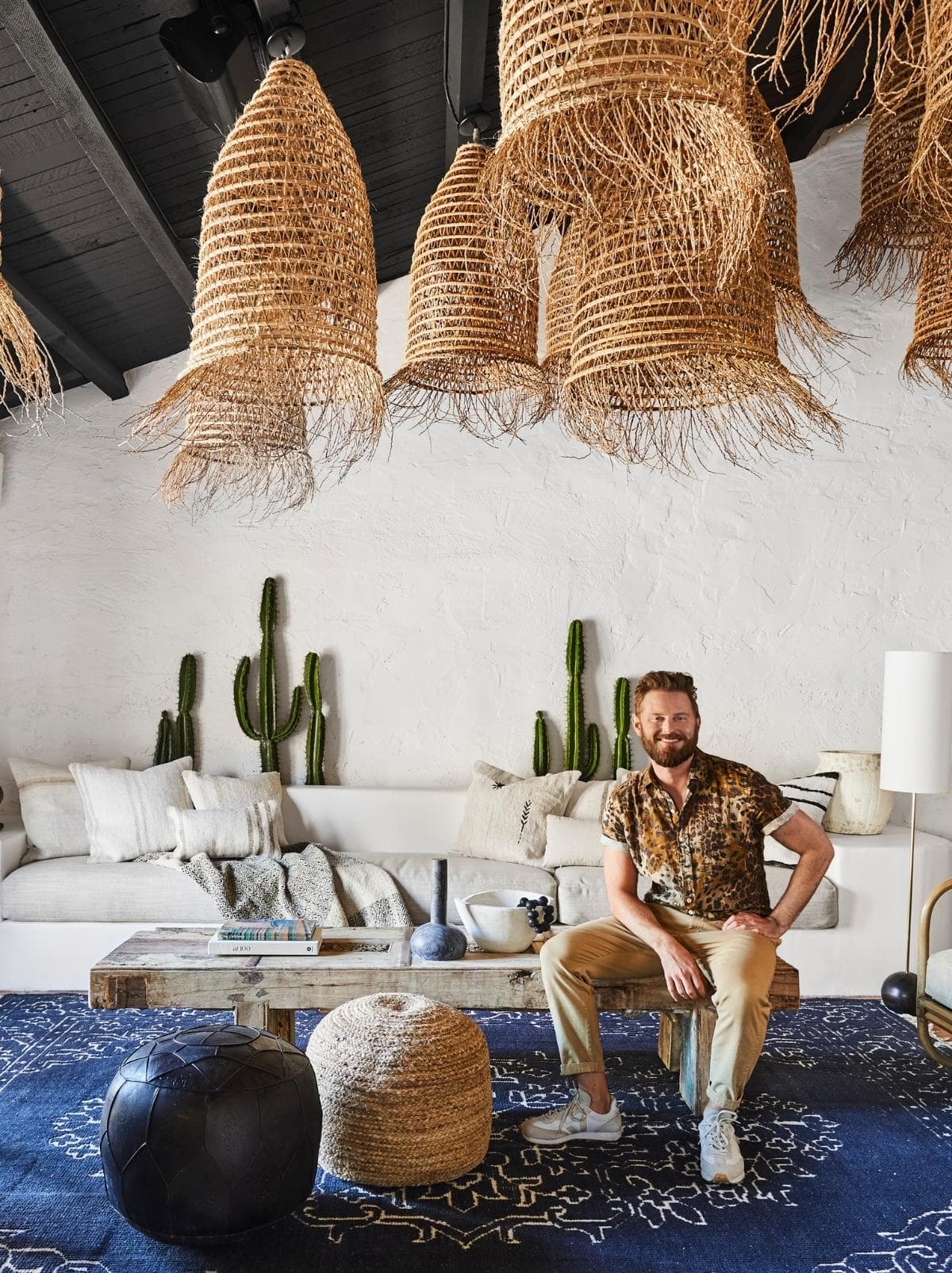 The Story Behind Casa Tierra

In July of 2021, Bobby and Dewey took a weekend escape to Palm Desert, part of the Coachella Valley about 2 hours east of Los Angeles. They only had intentions of spending a relaxing few days in the desert, but since Bobby is always on the lookout for his next project, he happened to stumble upon a property for sale just down the road from the home they were staying in.

While the 1950s Spanish home certainly needed a lot of work, he also saw an infinite amount of potential. It was situated on a large lot, and had plenty of character (in the form of wood beams and terracotta floors), and while it was on a totally private and secluded lot, it was also only a 10-minute drive from town. Plus with 7 bedrooms, 2 private casitas, a pool, and tons of outdoor space, Bobby knew it would make the perfect vacation rental.

So just like that, a weekend getaway became the catalyst for our most ambitious design project yet – and was christened Casa Tierra!

The Design Process Behind Casa Tierra

With Bobby and our design team in Los Angeles, it wasn’t feasible to handle this ambitious remodel remotely. He needed someone on-site in Palm Desert who could handle the many (and we do mean many) obligations of managing a design project. Enter Paula Oblen, a local interior designer specializing in vacation properties. With Paula’s keen eye and expertise in crafting stylish rental spaces, we found the perfect partner to bring Bobby’s vision to life. (In fact, the house Bobby stayed in when visiting Palm Desert was designed by Paula).

Working collaboratively, we took to transforming Casa Tierra into a true escape – infused with plenty of character, organic modern materials,  unique design details, and everything you need to truly get away from it all (in style). Keep scrolling to see the before, during, and incredible after photos of Casa Tierra!

“I wanted to create a space that was a true escape in every sense of the word. Casa Tierra is all about soothing colors, totally relaxation, and feeling fully connected to the desert landscape. ”
Bobby

LIVING ROOM – Before & After 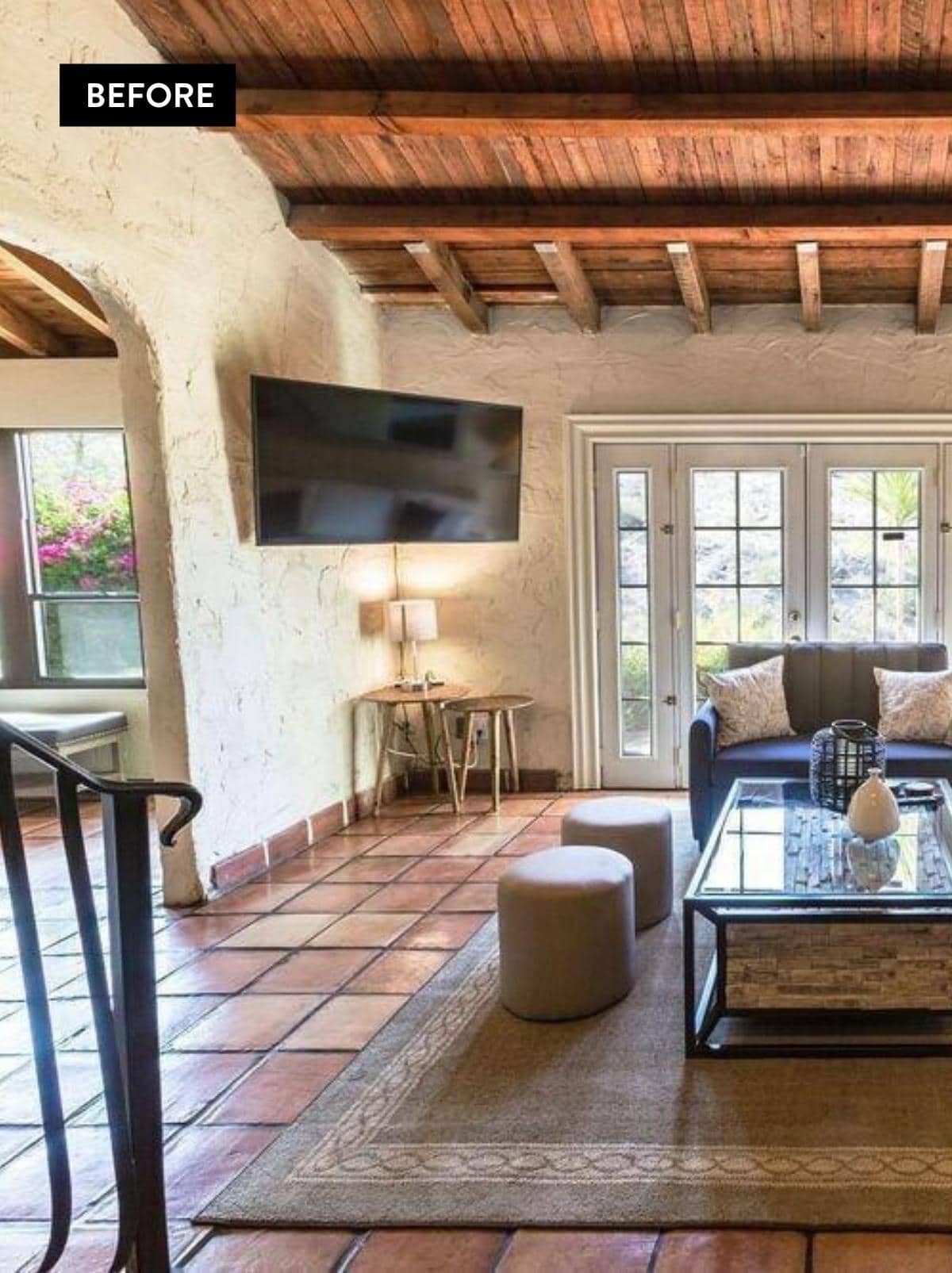 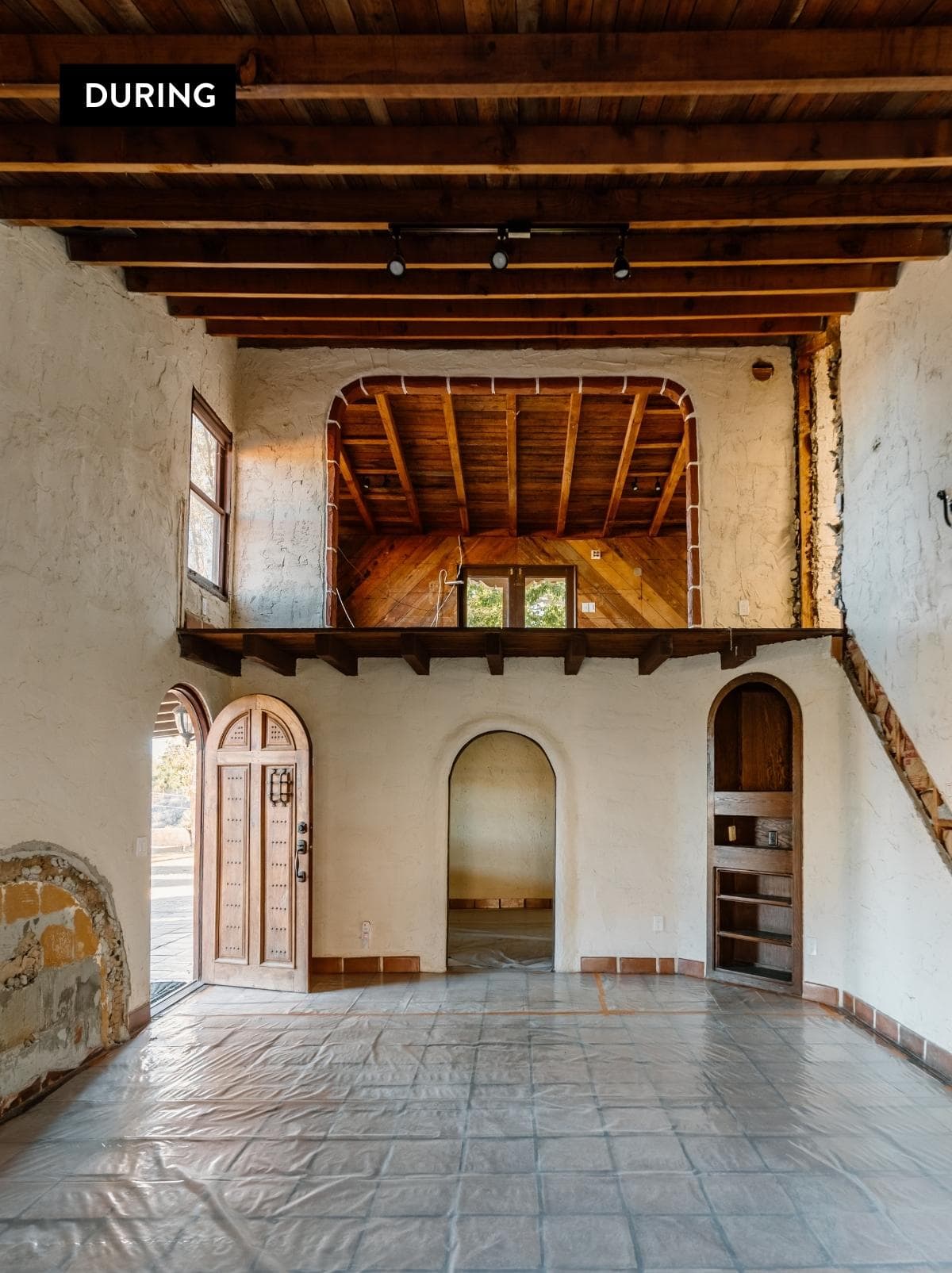 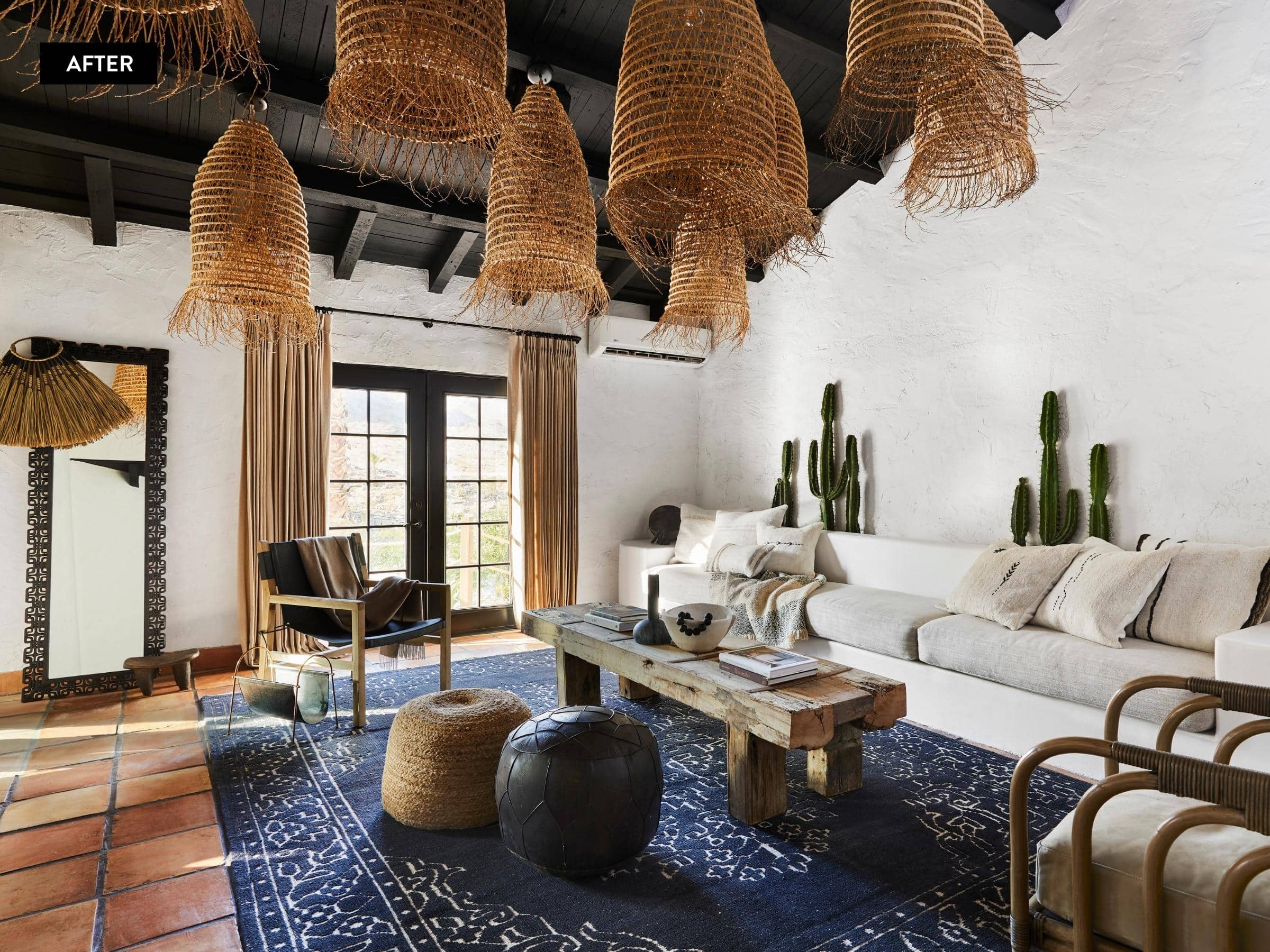 As the first room you enter in the house, the living room needed to make a grand impression – and set the tone for the interior design. We started by making two significant changes to the layout: removing a staircase and balcony that lead to a guest room and expanding the entrance to the dining room. This allowed for a larger space that flowed into the rest of the main house. From there, we kept things neutral and totally natural, with plenty of organic materials, an ebony-stained ceiling to create contrast, and a custom banquette perfectly suited for a sunny afternoon nap.

DINING ROOM – Before & After 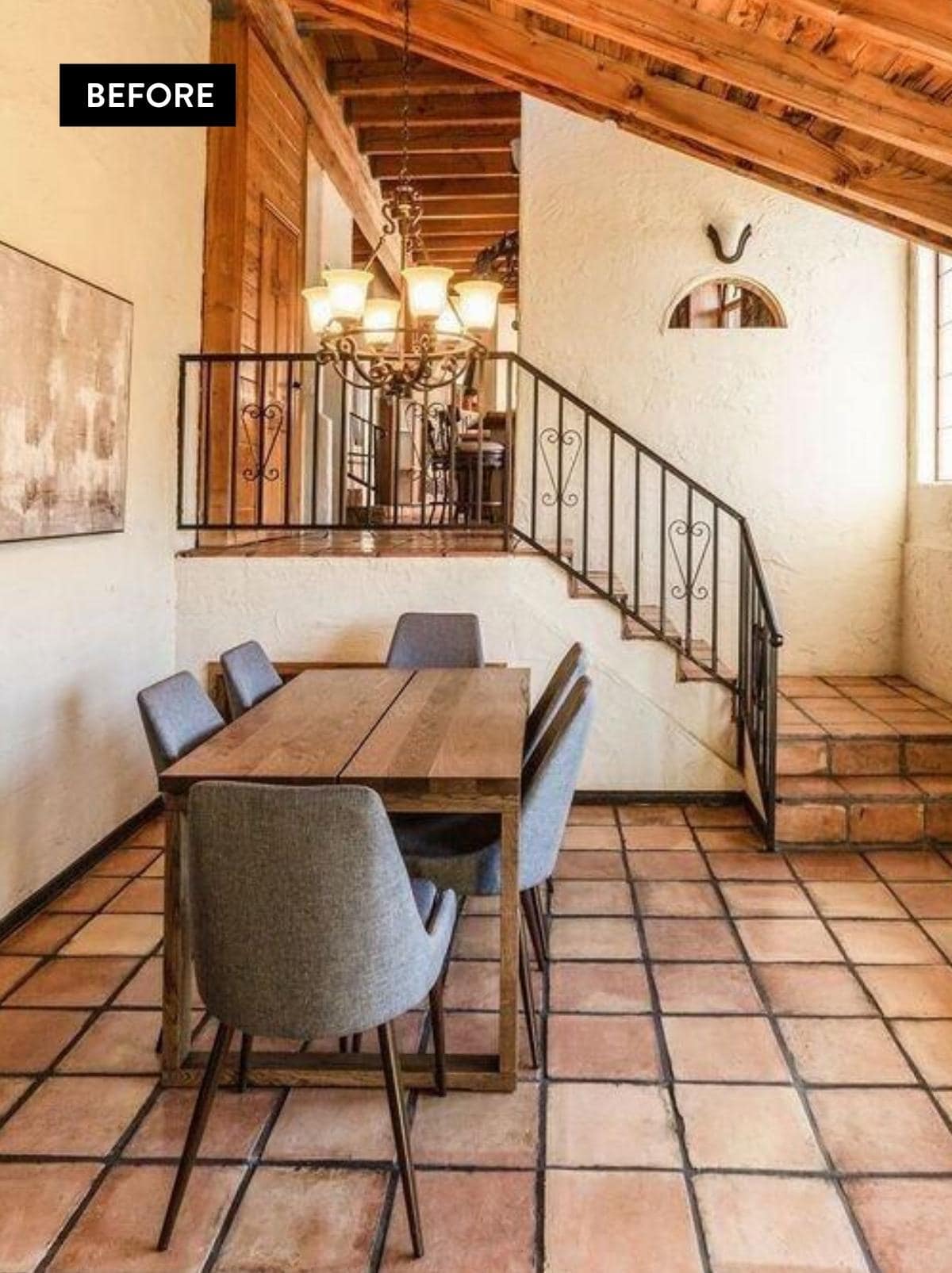 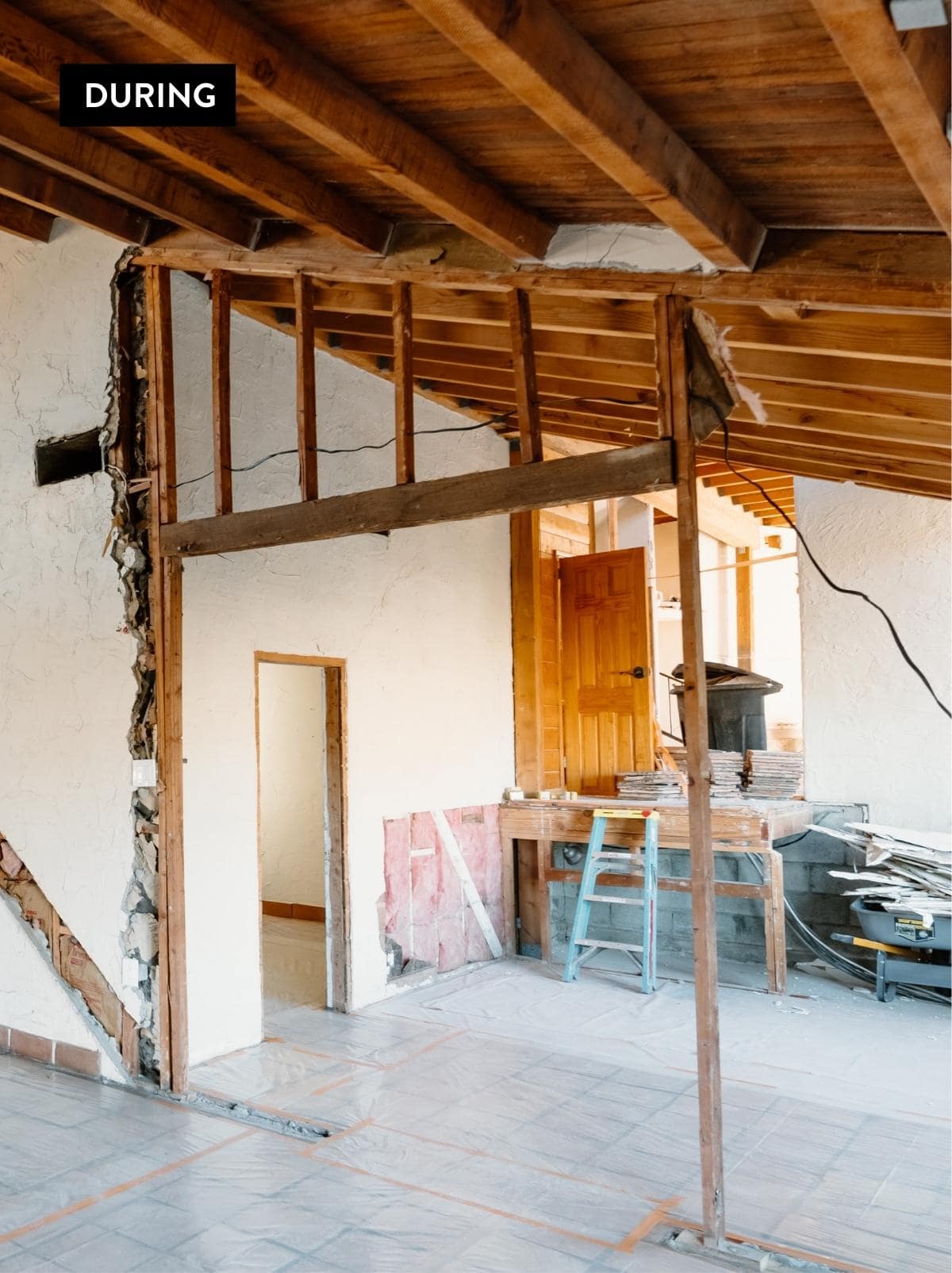 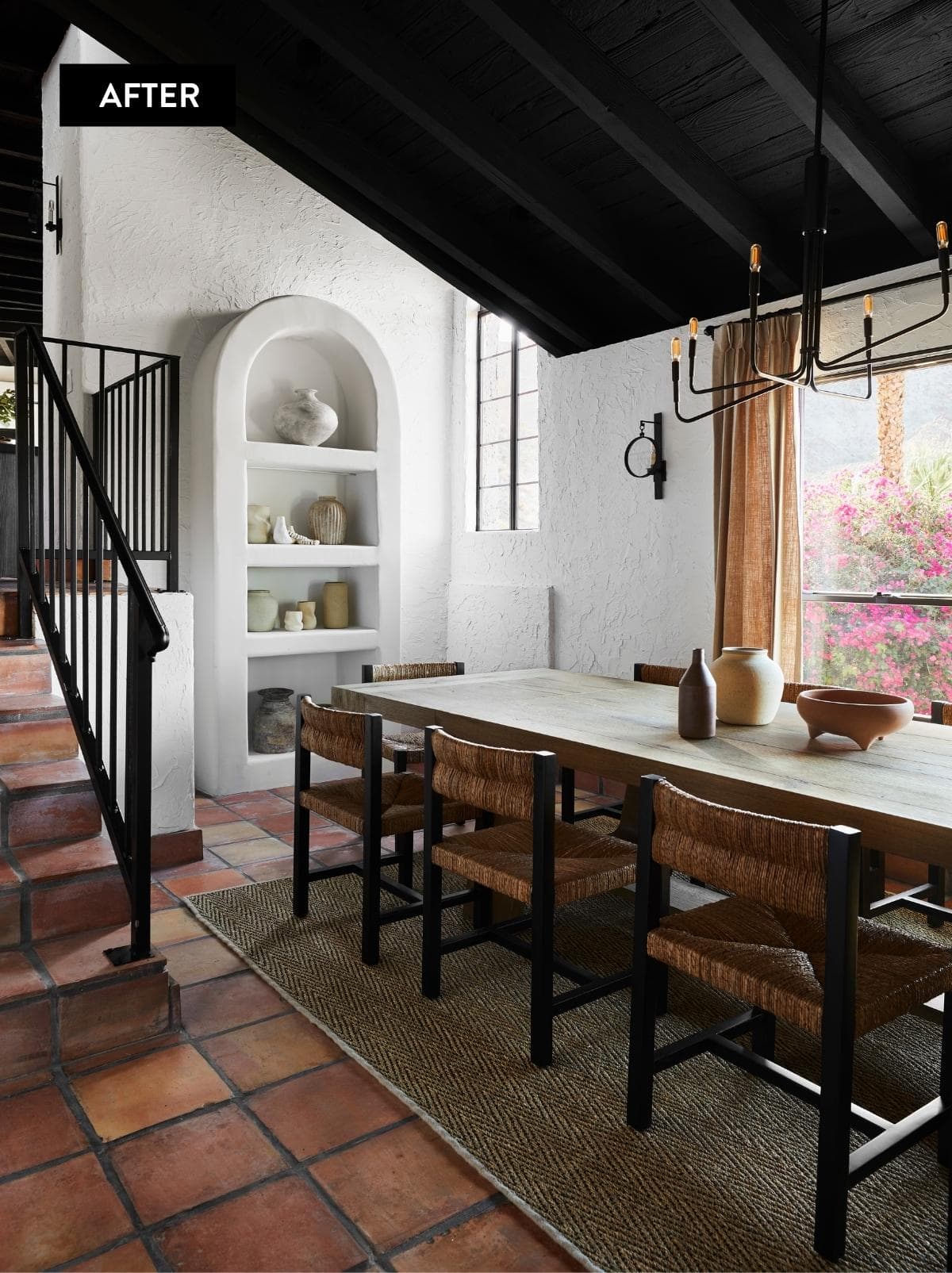 Look at this beauty! Can’t you imagine a big family dinner here? With the dining room fully opened to the living area, we needed to make one other structural change to ensure the room was fully functional. By moving the staircase to the left side of the room, we created a continuous path from the living room right up to the kitchen (and made even more space for a table that will seat up to 10). We also constructed this gorgeous built-in to serve as a focal point – and highlight a collection of ceramics sourced from all over the  globe. 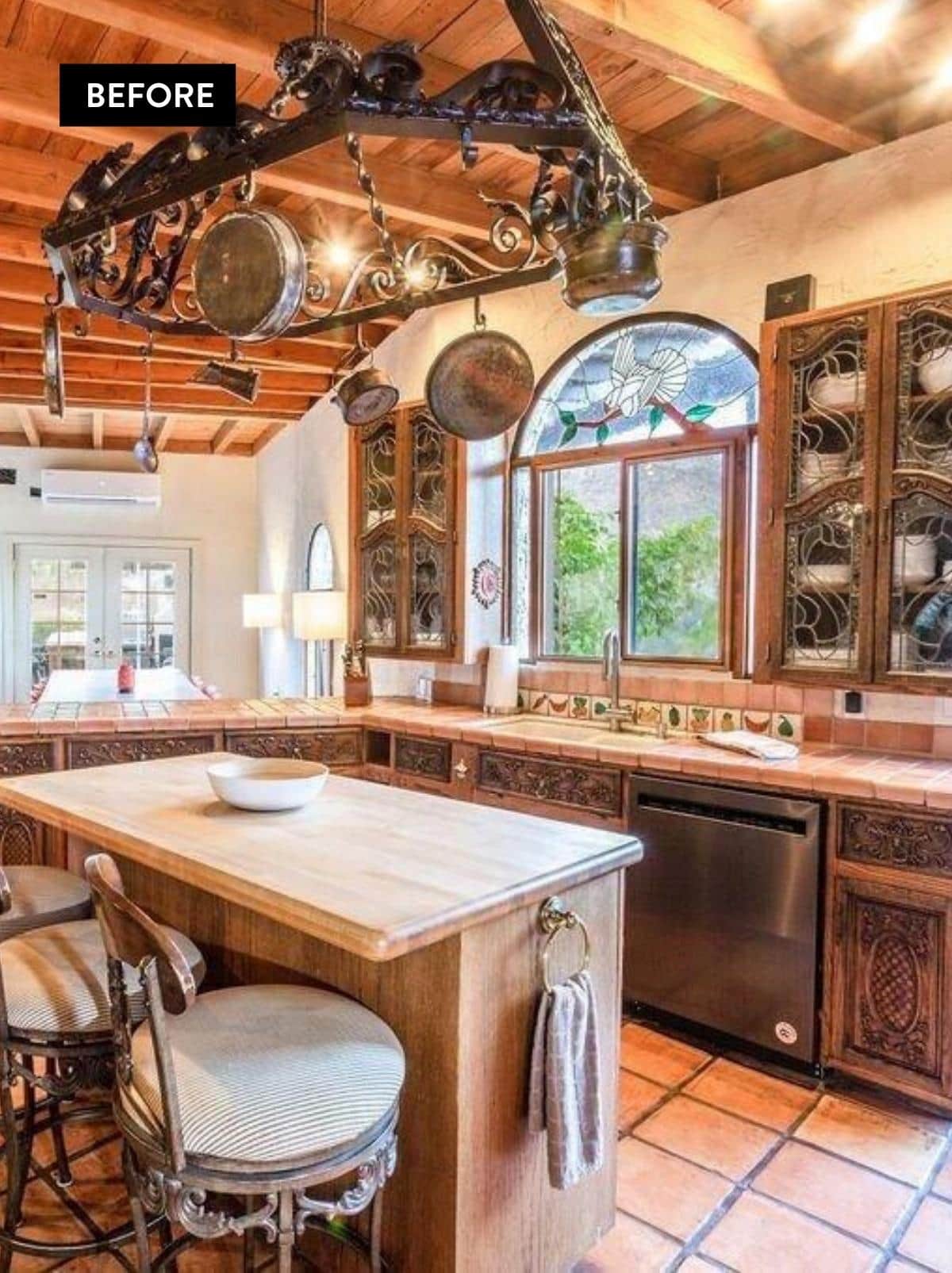 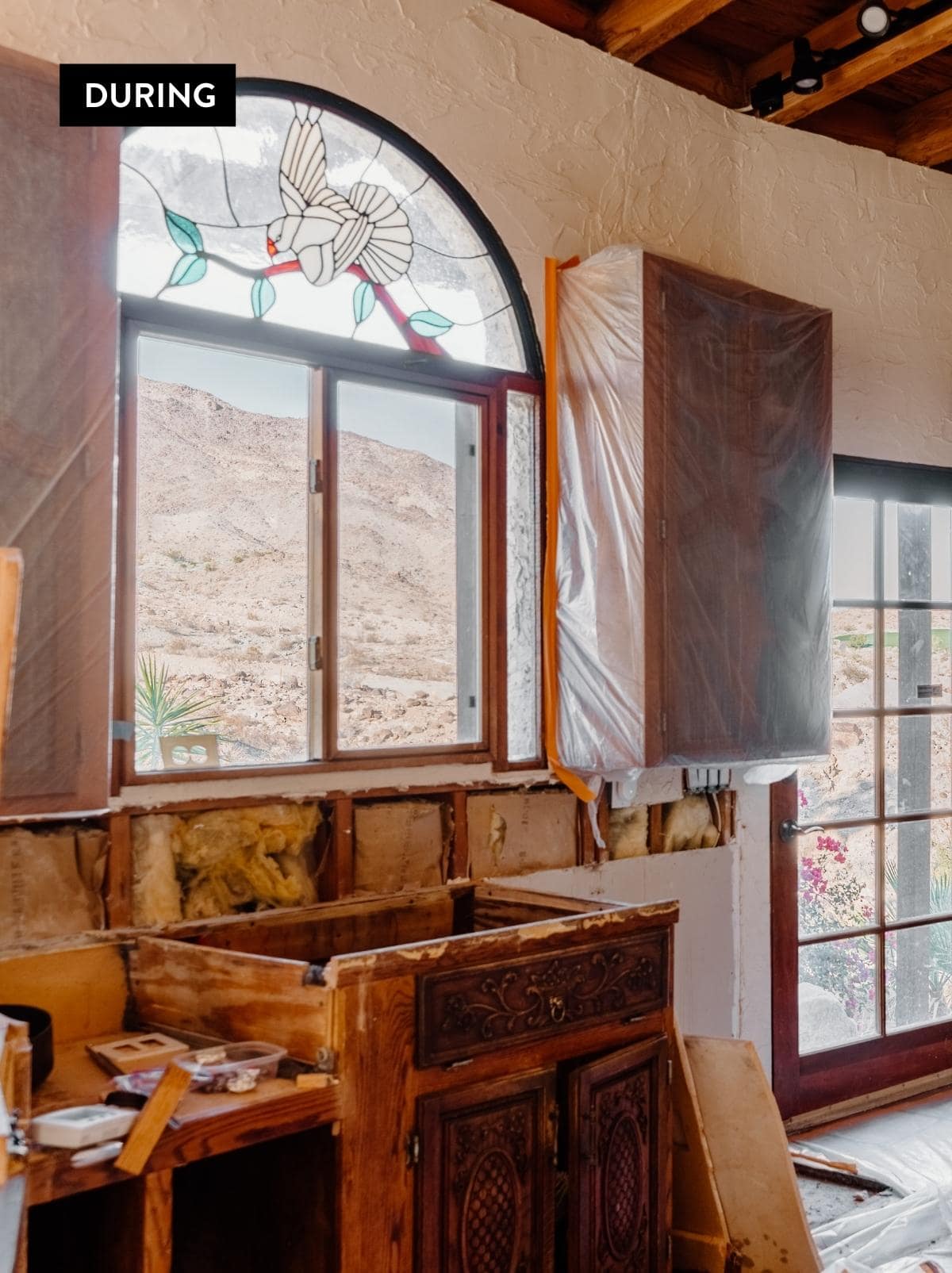 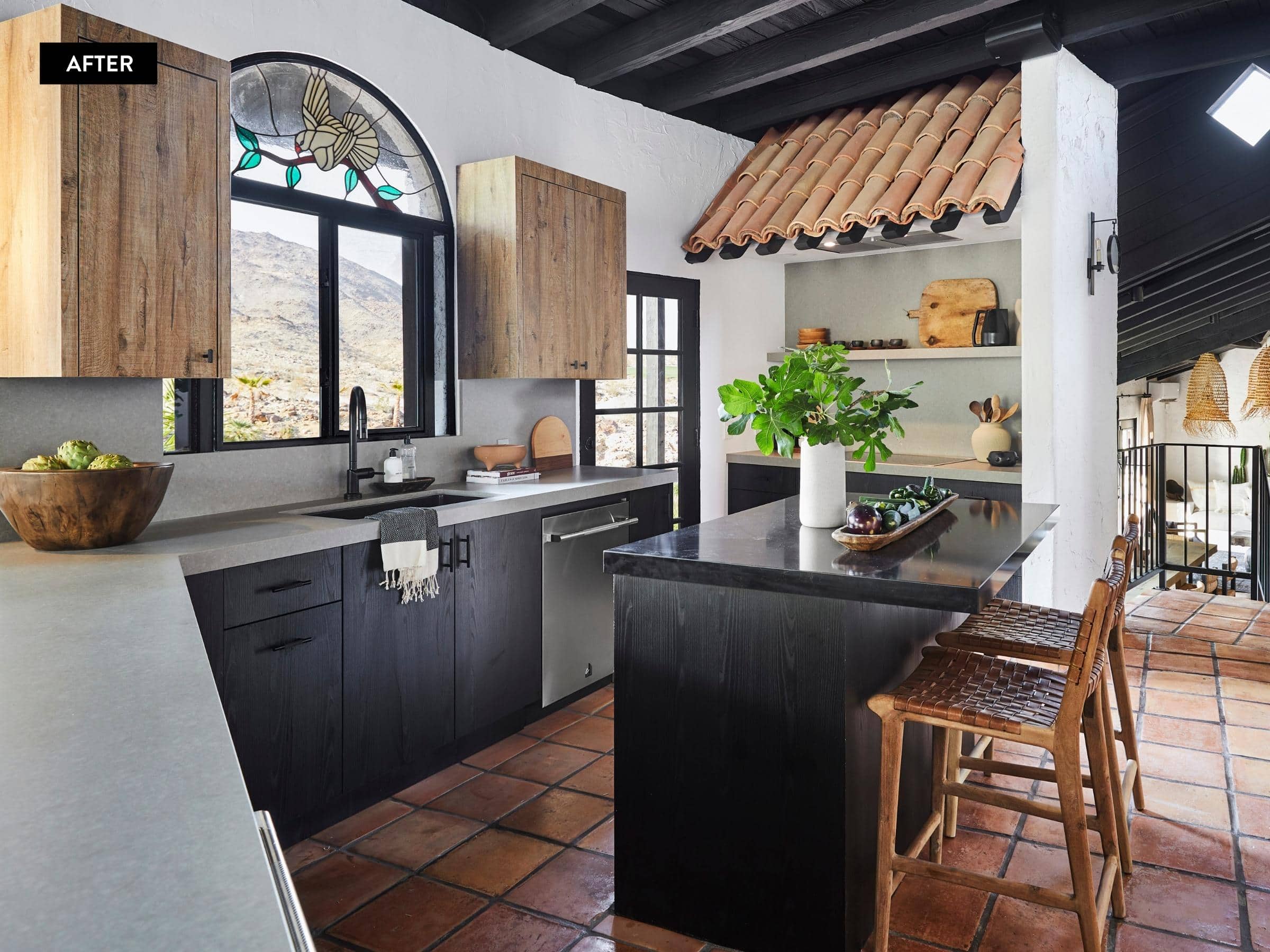 Giving the kitchen a Spanish meets organic modern look didn’t require a total gut job. It was about making a few calculated design choices – and keeping original elements that would add character. Without altering the actual layout of the kitchen, we brought in ebony-stained lower cabinets, weathered oak uppers, and gray quartz countertops. These graphic elements simplified the space and provided a modern contrast with the handmade terracotta tile floor and tiles over the range. And of course, we couldn’t let go of that charming stained glass window either!

PRIMARY BEDROOM – Before & After 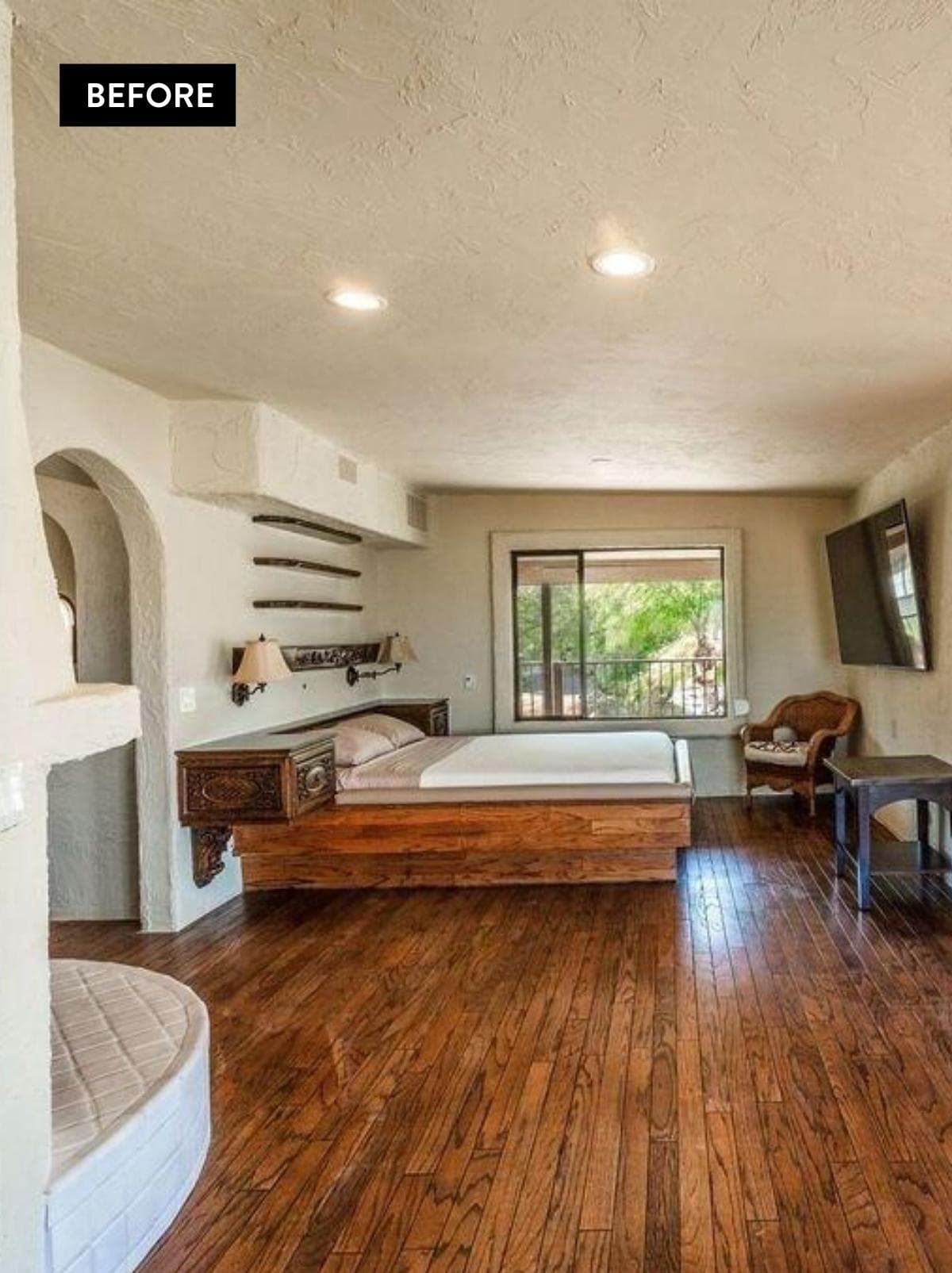 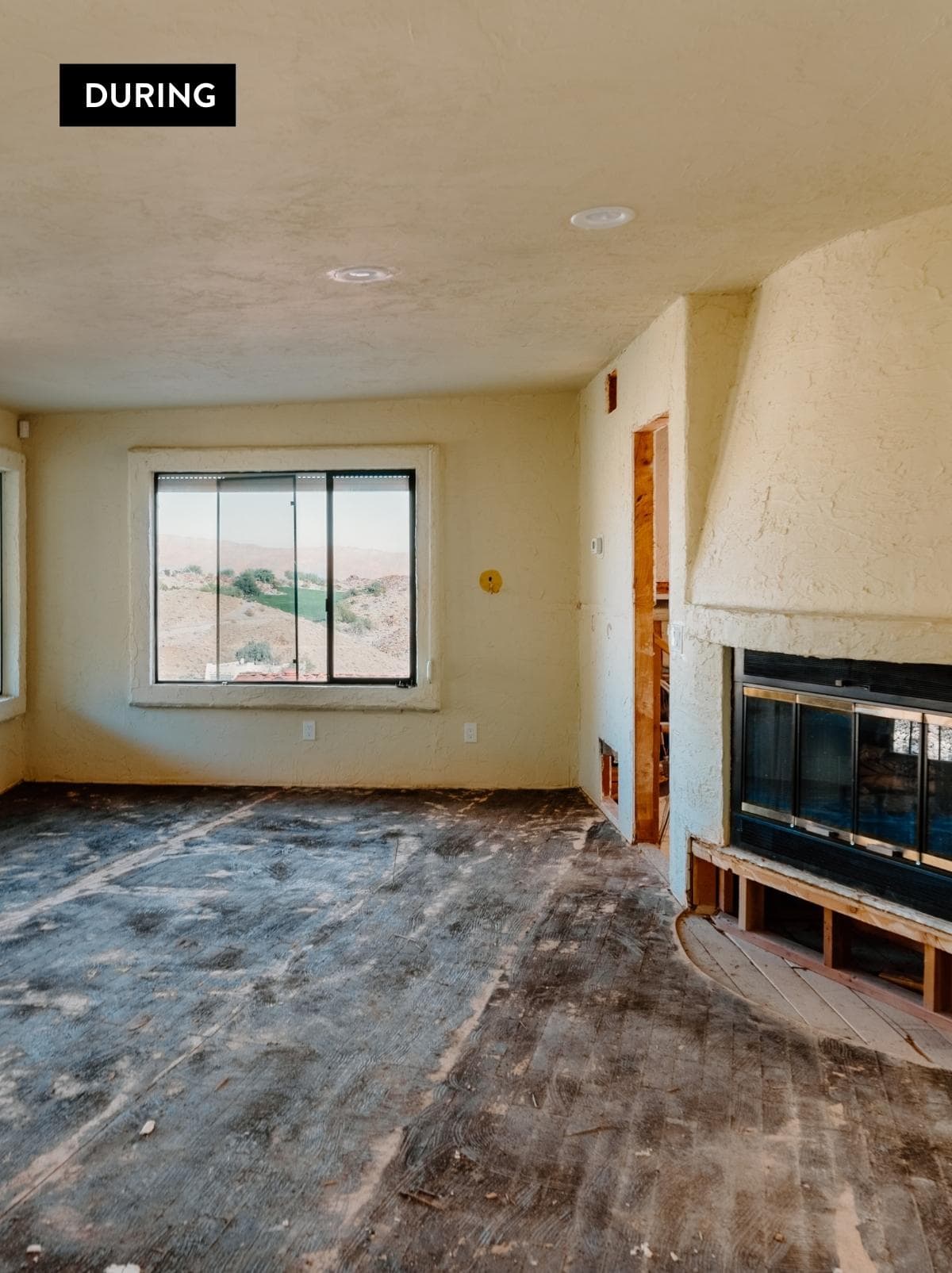 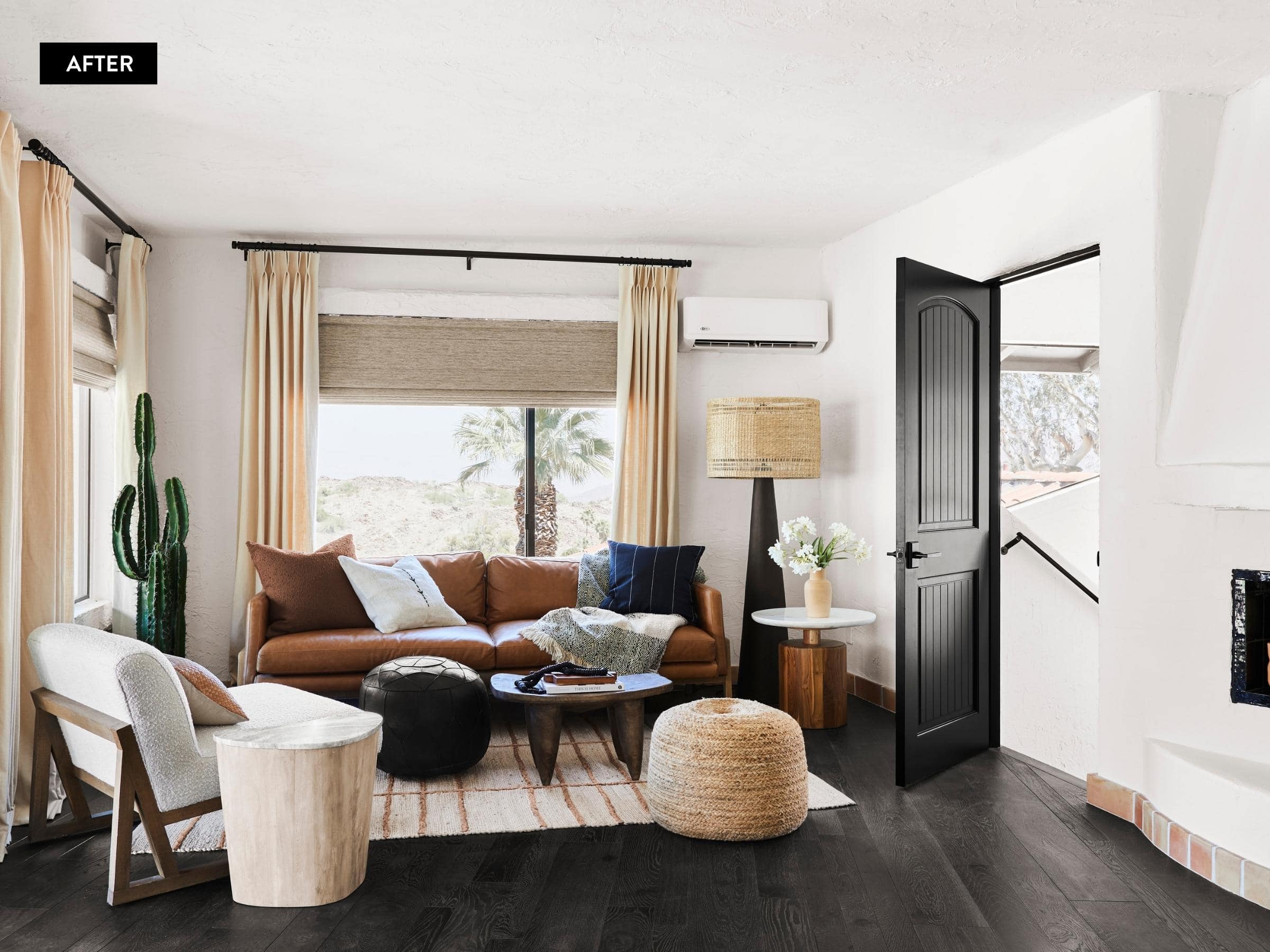 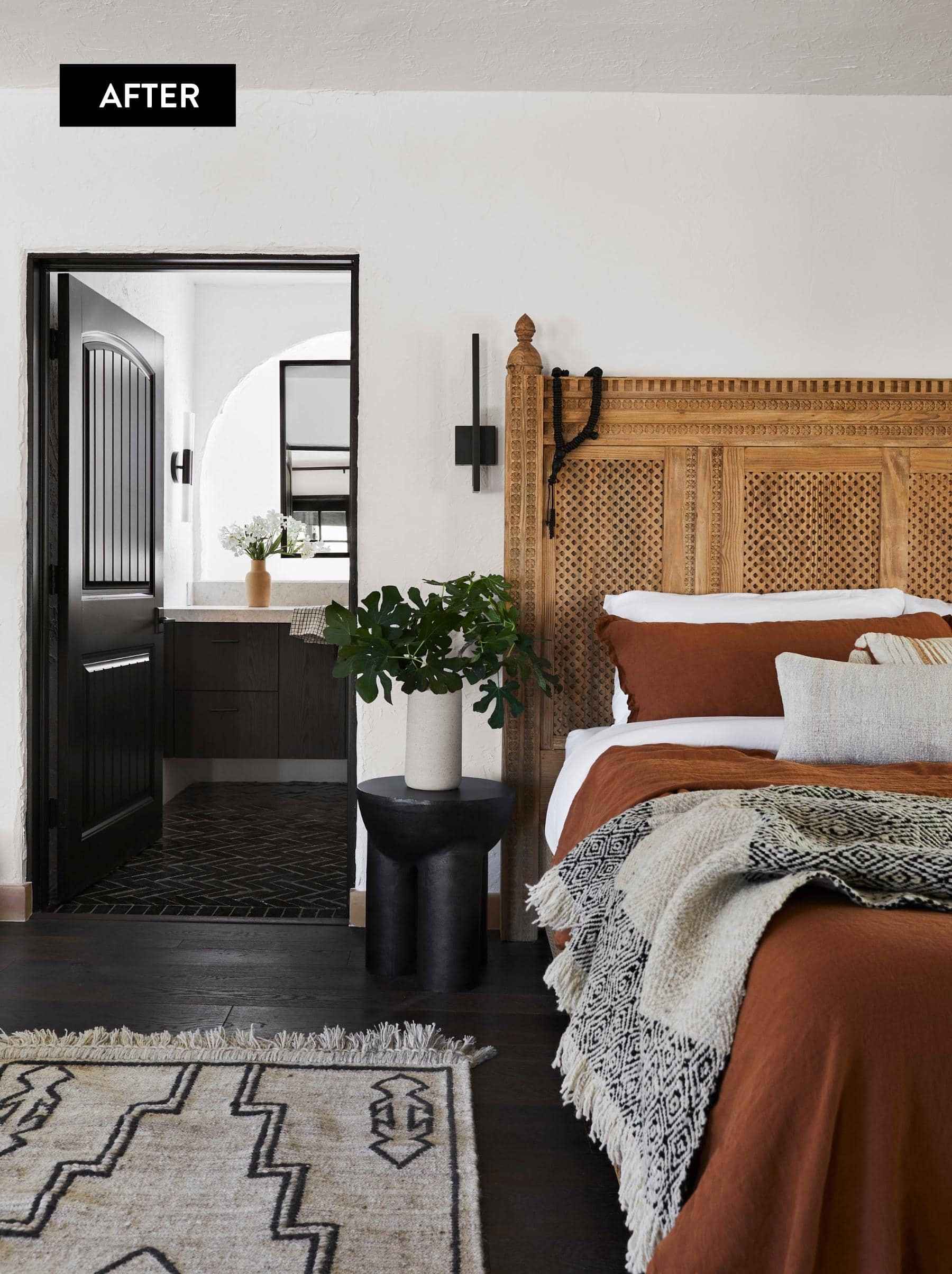 The primary bedroom did have a lot of selling points before we got our hands on it: a handsome stucco fireplace, great views, and a wraparound balcony. It just needed that Bobby Berk touch to take it to the next level, design-wise. Staining the floors black, bringing in lots of texture, and an array of globally sourced furniture did just the trick!

THE PROPERTY – Before & After 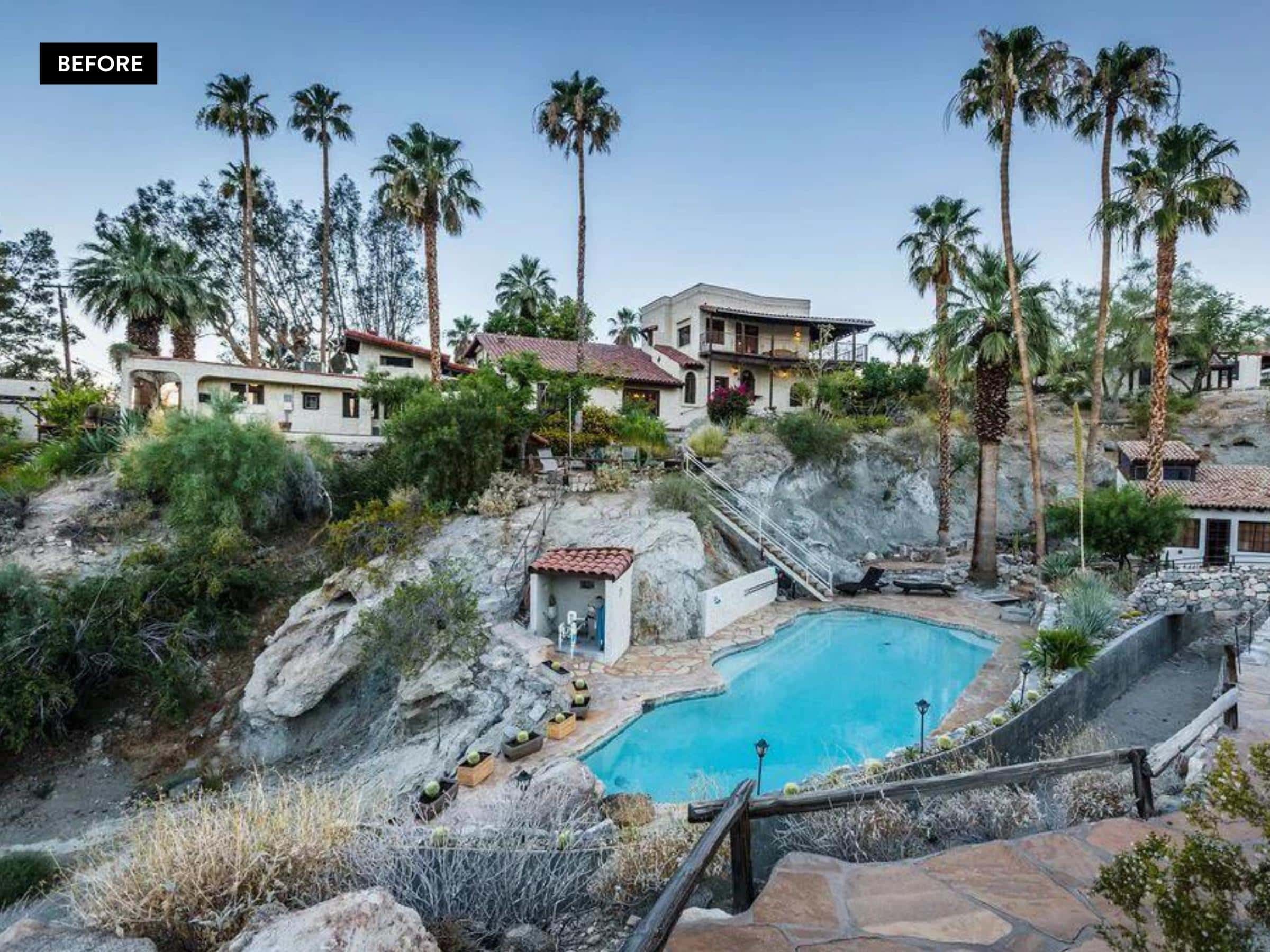 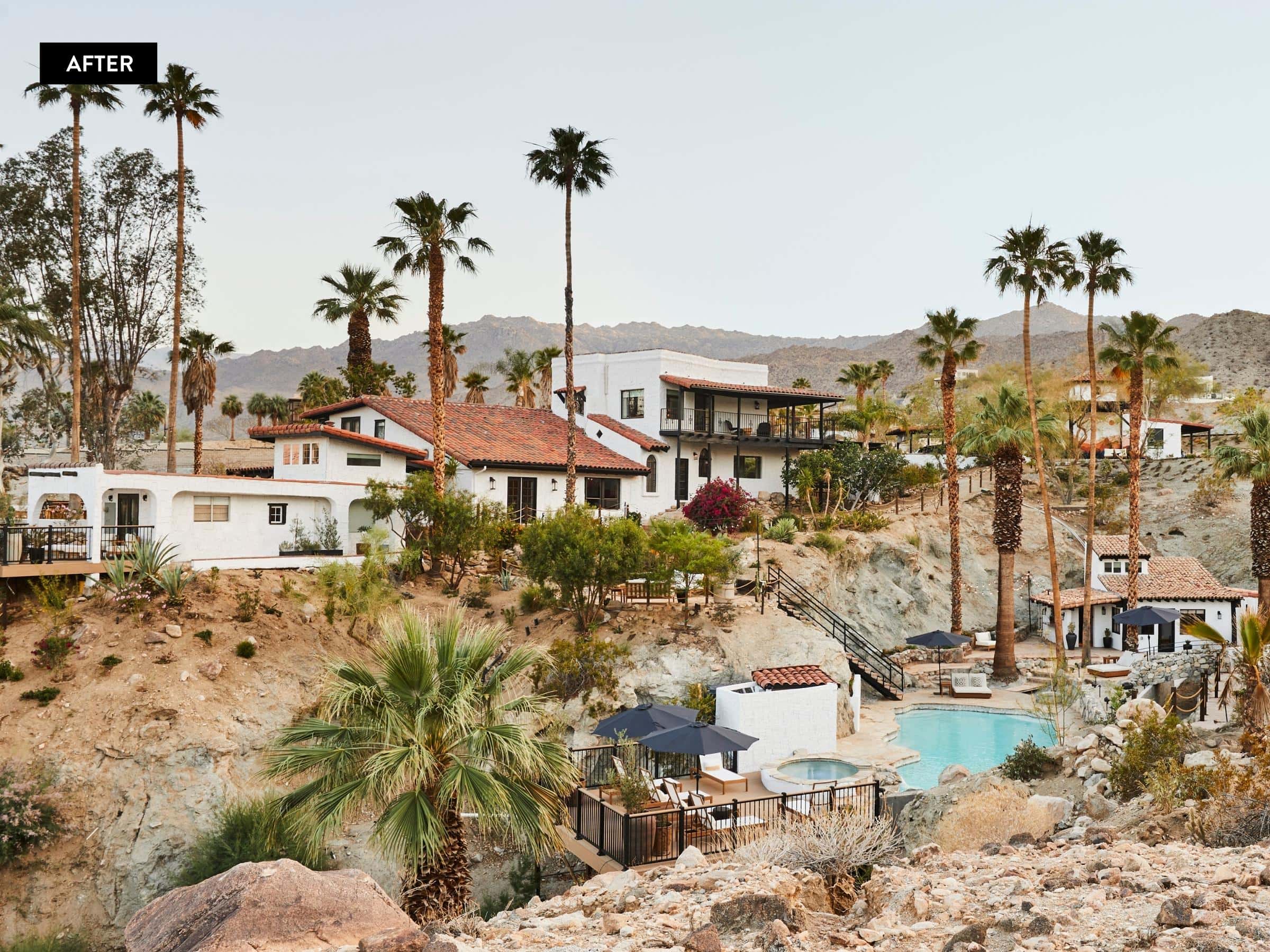 Spanning over 2.3 acres, there was a lot of ground to cover (and plant) on the Casa Tierra property. So after a spiffy new white paint job for every structure, we added two new decks, lots of outdoor seating, and a whole lot of desert landscaping (which also gets lit up beautifully once the sun sets).

Stay tuned for more behind-the-scenes posts about Casa Tierra coming this week. And click here to book your very own getaway at Casa Tierra on Airbnb hosted by Bobby! 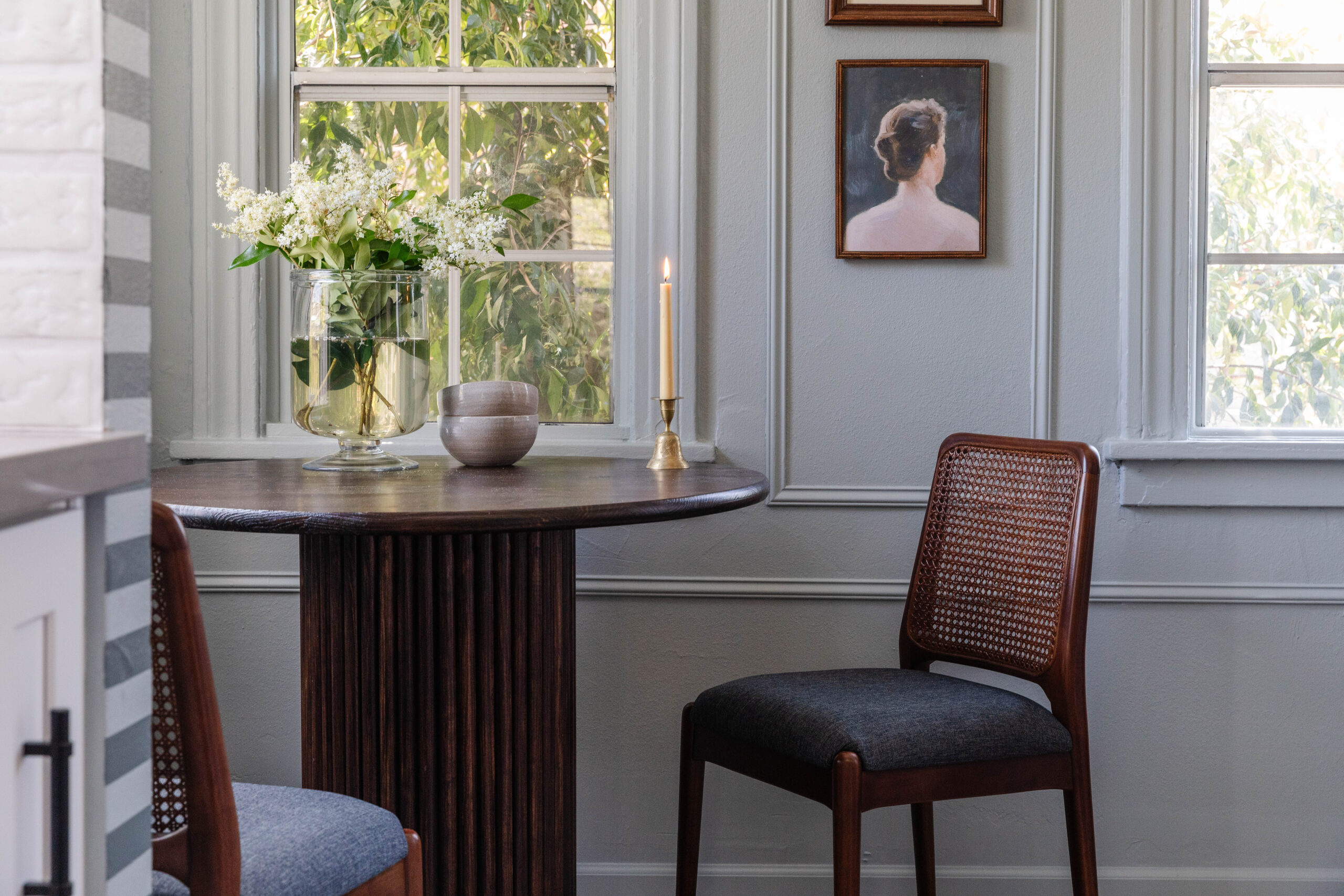 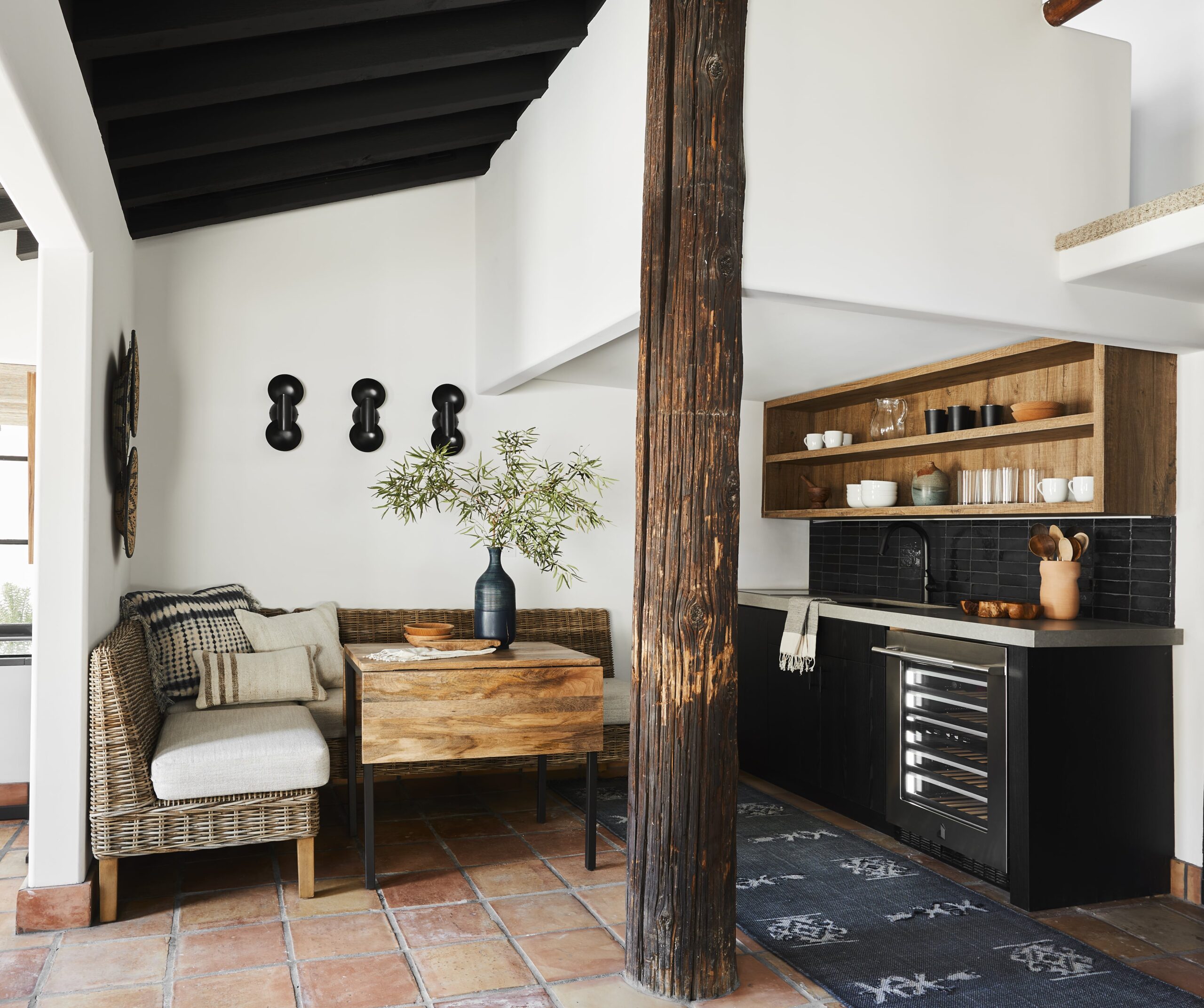 Casa Tierra: The Design Details Behind The Media Room & Casitas 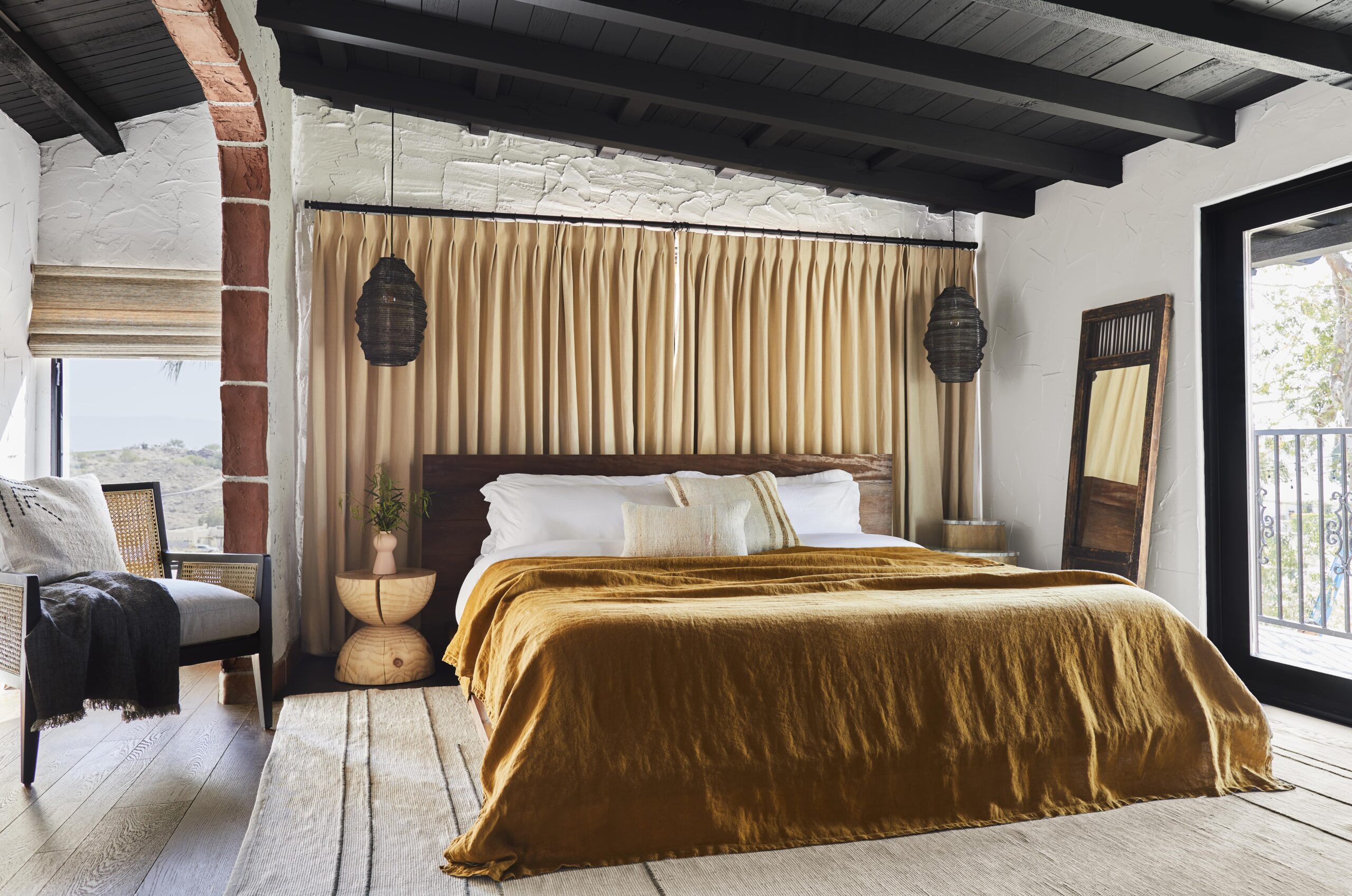 Casa Tierra: The Design Details Behind The Bedrooms & Bathrooms